I'm really excited about this game. Heroine Dusk is a "retro turnbased rpg adventure game" (in the words of Dora at JayIsGames) and strongly reminds me of one of my favorite RPG games in the 80's called Might and Magic (on the Apple II). I didn't care for Wizardry, but did love Might and Magic (though ultimately, Ultima was the ... ultimate of computer RPG games).

Here's a typical screenshot from Might and Magic I - first-person point of view. 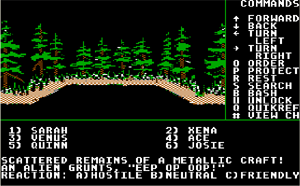 and one from Ultima II - top-down point of view. 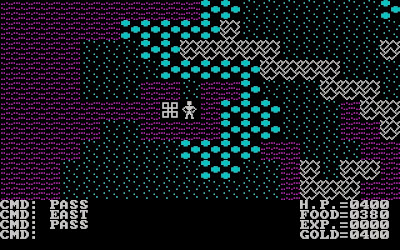 And here's a screenshot from today's game, Heroine Dusk - first-person point of view. 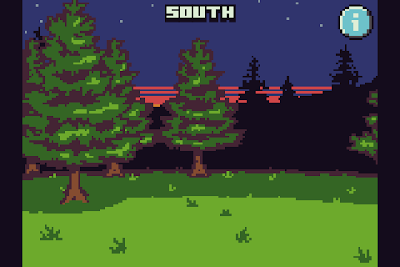 Like Might and Magic and Ultima, you will travel through a medieval setting with the the tap of your finger, battling monsters, getting gold, and in general, living inside a world that is inside your Firefox OS phone! 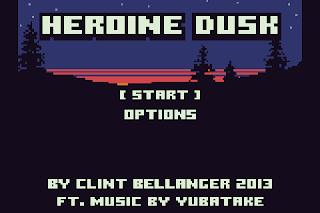 Nice and moody. If you're curious, here are your options: 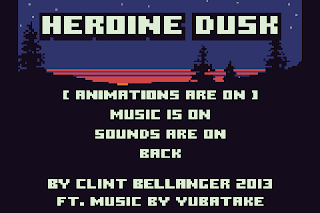 The music, by Yubatake, is moody also, and sets the tone for an RPG. And if you needed more, there's a somber prologue: 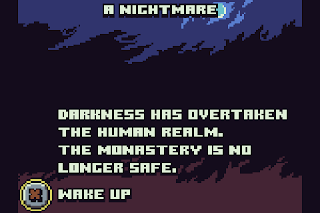 Tap on the button to wake up. 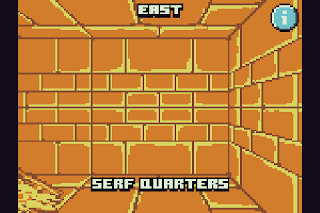 By the way, you're a serf and if you press the I button at the top right, you'll find out that you are the heroine of the story. 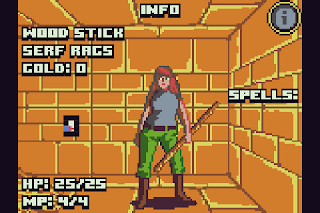 The I button is info (or inventory) and tells you what you're carrying (a stick), wearing (serf rags), and how much gold (none). There's also a little blob on the center left that will turn out to be a map of where you have been. You'll also see your hit points (25/25 - if you go to 0/25, you'll die) and magic points (4/4). Magic is used for spells, and you'll pick them up but you start out with none. You're a serf, after all.

So next you hit the I button to get back to the story. The controls are really simple and I find much easier than using a mouse on a PC. Smooth and fun! You move by tapping in the center to move forward, or on the left or right to turn.

You're ready to  leave and you turn and see a door. 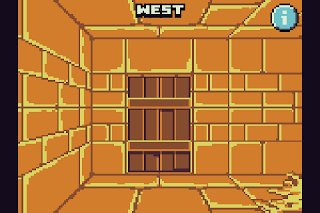 Go through the door and you're outside in a courtyard. 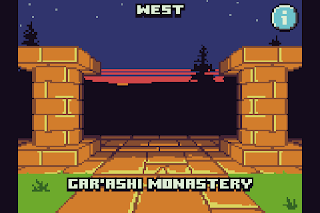 This is a monastery and you're told its not safe! So move west. Oh, oh, what's this? 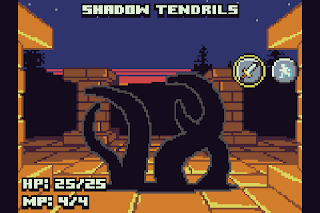 Definitely not safe. A monster named "Shadow Tendrils" blocks your path. You can click on the sword on the right to fight or the smaller running figure to ... run away. Let's fight! 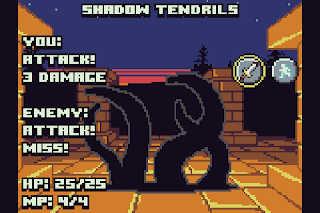 You attack and the enemy misses. Fight a bit more and with any luck, the monster is defeated. 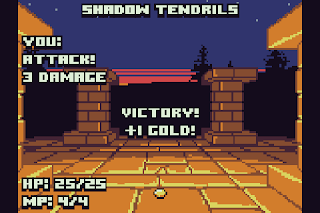 You get 1 gold piece. Good for you. Keep going west until you come to Monks Quarters. 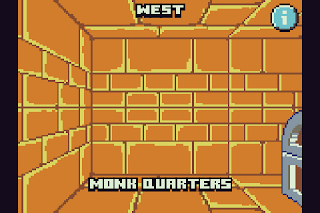 Inside you find a chest. 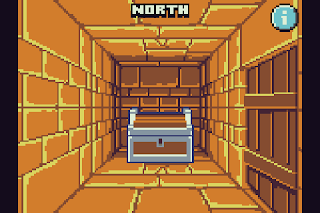 Open it and you'll find a wooden stick. Your first weapon. Next go back out and head north until you come to a building called Meditation Point. 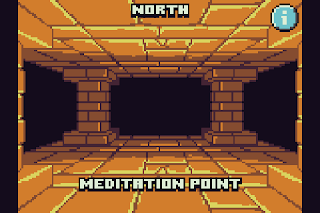 Inside you'll find another chest. 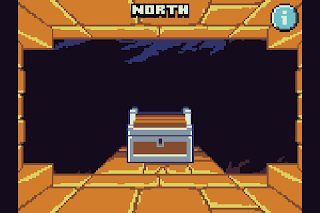 It contains a spell that lets you heal yourself. 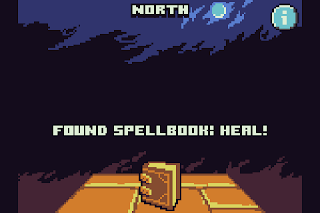 You're now ready to explore the world. Head South from the Meditation Point and leave the Monastery. 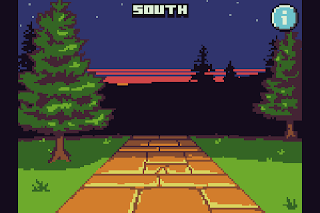 And so on. The game looks large and I'll be curious what lies within. I'll write up a followup review after I've played it a week or two!

If you want to know more about the game and its author, go to http://clintbellanger.net/. Definitely worth $0.99!

What's that, you say? $0.99? Yes! I paid for this game. Firefox Marketplace is now set up for payments. As I noted in my last game review at http://firefoxosgaming.blogspot.com/2013/12/orbland-labyrinth-game-review.html, Orbland was for sale but I just tried the free version.

I tried the free version of Heroine Dusk, but decided it was time to bite the bullet and plunk down $0.99. Here's the two versions: 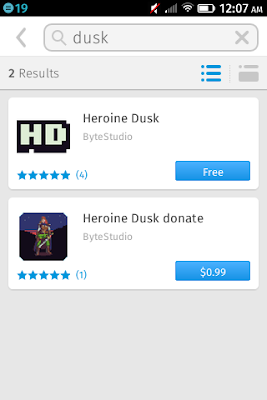 The paid version is called "Heroine Dusk donate", and I did just that. The procedure to buy a game is pretty easy. Here's the procedure I followed:

After clicking on $0.99, I had to sign up at marketplace.firefox.com and become registered with Mozilla Persona system. 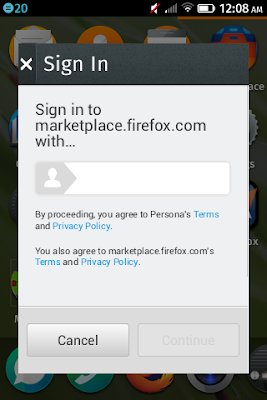 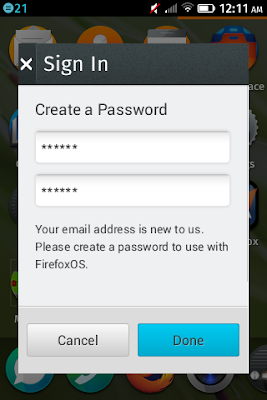 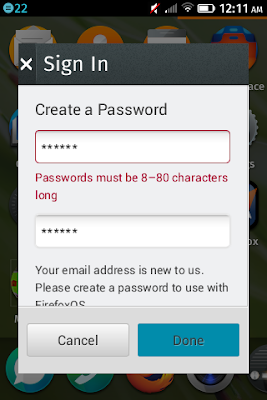 They also wanted a PIN from me: 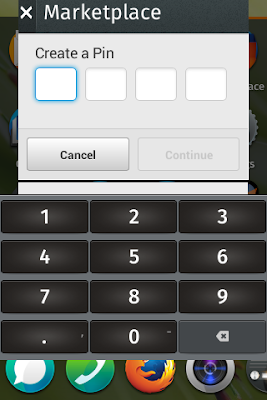 I then had to confirm my account by email and then give them my mobile number and carrier. 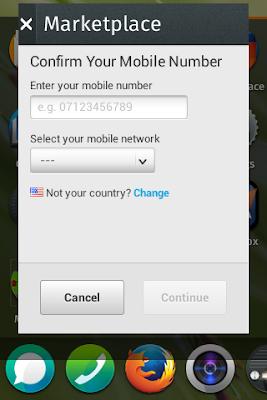 And then they sent me a SMS message that I had to copy a six-digit number from, all to prove I am a real person and not a thief. And finally, they wanted a credit card number and the relevant details.

After all that, my purchase was approved, and all this was able to be done on my trusty ZTE Open Firefox OS phone. Pretty cool, huh!

I'm curious if people can buy games in other countries. If anyone has, let me know.  This is so exciting!

Firefox OS is now real. If you can buy games in the marketplace, how much more real do you want? I am really excited about being able to buy a game, and very pleased that the first game I bought was a role-playing game that I'll spend hours playing! I'm especially impressed because this is a large complicated game but fits nicely on my low-memory phone and runs great. If anyone says you can't play real games on a Firefox OS phone, tell them about Heroine Dusk!

In case you haven't guessed, I'm a big RPG fan, which makes me bump this up to a 6 out of 5 and because it is a bargain but paid app, I'm giving it a 7 out of 5 because I'm so excited. Yippee!


Cost: Free for limited experience, $0.99 for full game.
Genre: RPG
Score: 7 (out of 5)
Tested on: ZTE Open (Firefox OS)
Get it at: Firefox Marketplace