The purpose of this blog is to talk about Firefox OS games and game programming. However, every once in a while a game tickles my fancy just the right way and so I'm going to review a game that is only on Windows!

What is so special about Sanctuary RPG? Well, for one thing, the graphics are all in ASCII (or is it ANSI)? Making 3D games seem to me a lot easier, but there's something really cool about people like Black Shell Games. Crazy is also another word, but I prefer awesome when talking about ASCII graphics. And mix that with RPG and you get some fun stuff.

You can get this game, which is in Beta but is almost finished (version 0.92), from http://www.sanctuaryrpg.com. It hasn't actually been released, but they are looking for an official release around March 30. The cost is 100% free and donations are optional. (Simply click on "No Thanks" in the download prompt.) The minimum donation was $1 but I was happy give more. If you give enough, they'll make you a producer (which will impress your friends and you can put it in your resume or CV)!

Boot it up and here's what you see. 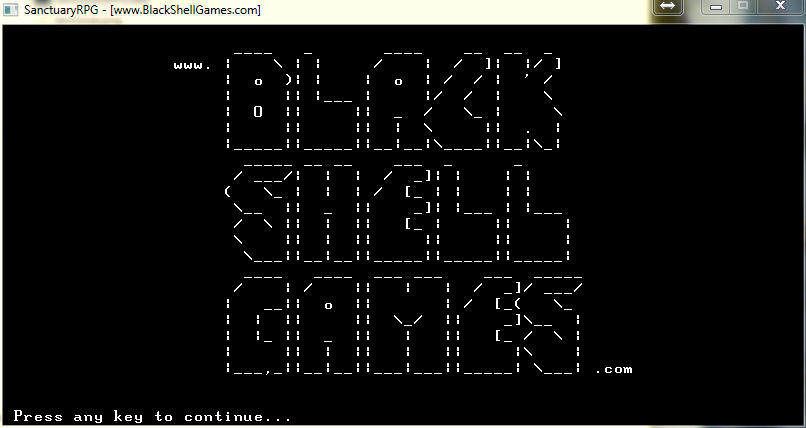 Press that Any key on your keyboard and you get this: 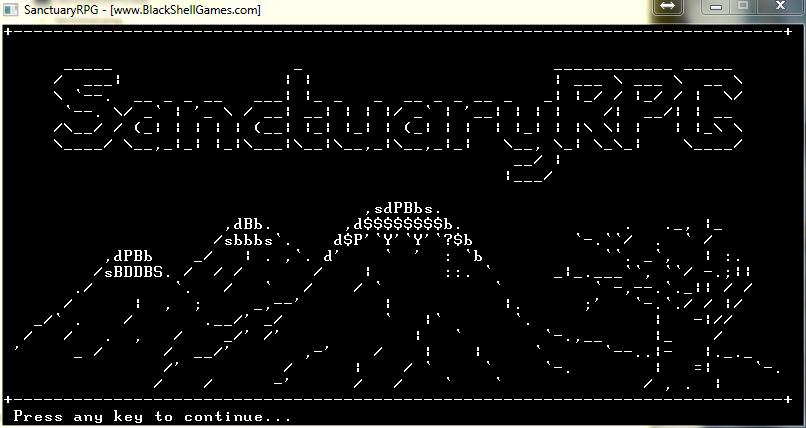 The ASCII art here really looks smooth and descriptive. Continue on to: 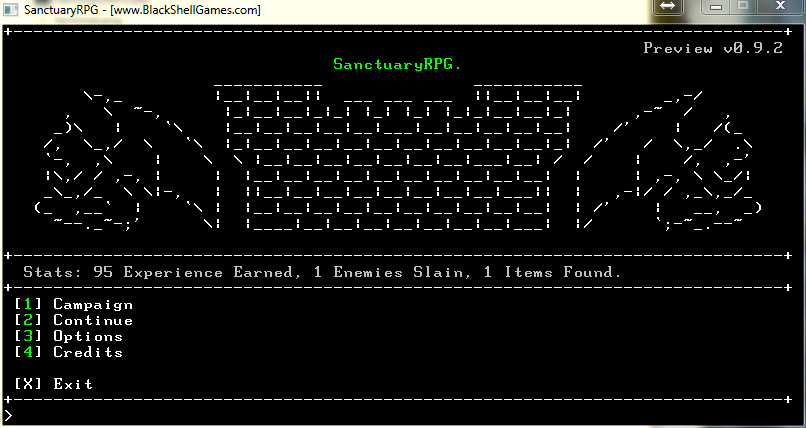 Please forgive the formatting. I had to make these screens big enough to read, so they stick out on the right side of the blog and cover up some of the outside text. But I like this enough to make it so you can read the text and admire the ASCII art.

Why do I like this so much? Well, it reminds me of a series of games for the Apple II called EAMON. In 1980, a madman named Donald Brown created a game called EAMON, but he made it into an engine and invited other people to create games with it. One of the cool features was that you could build up your character and play other games using equipment from earlier EAMON games you played. Sometimes that might mean you had a ray gun that you could use to mow down barbarians with, but it was relatively balance. There were about 200 EAMON adventures, but I had at least 50. That was back in the day when you didn't download things but sent away for floppies filled with games from a catalog. Sanctuary RPG isn't a game engine (yet) but it has the spirit of those early days and uses some nice ASCII art to wrap it in.

All this has made me think that it might be fun to create an RPG like Sanctuary and put it in the Firefox OS Marketplace. Maybe even make an engine! So I'll think about this, and if anyone knows of any text adventure games in the Marketplace, I'll review them for sure.

But on to this really well-done RPG that should be in the Marketplace. I wonder what it was written in. The original EAMON was written in Apple BASIC. But JavaScript is the new BASIC, but 1000 times better.

Back to Sanctuary RPG (or sRPG as they call it). Pick a Campaign by clicking on 1 and pressing Enter. 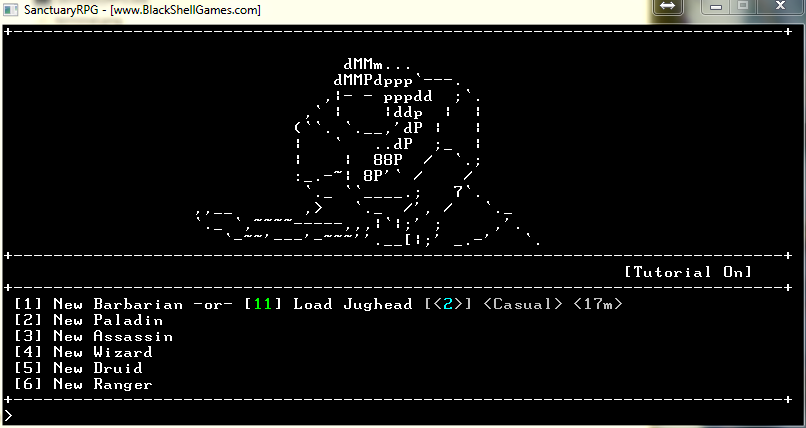 You choose the type of person you want to be. I always pick Barbarian for any new game and often call him Jughead. In this screen I had already picked Jughead, and am going to pick a new class. There are 6 choices. How about Paladin? 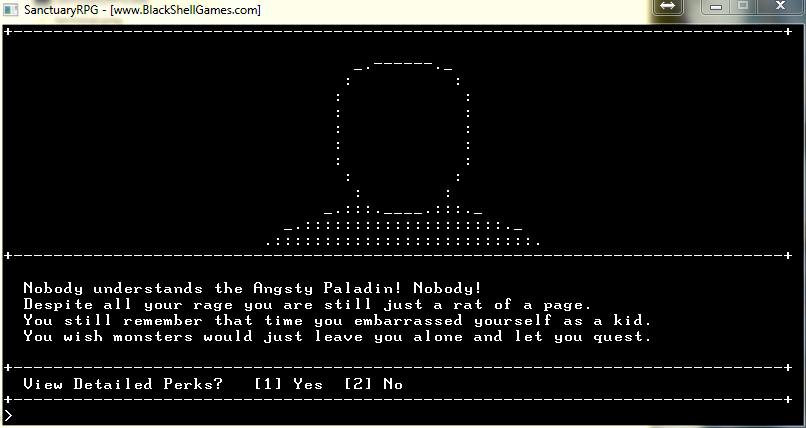 Ah, yes, Paladins are always angsty! No one understands them! But they have perks! 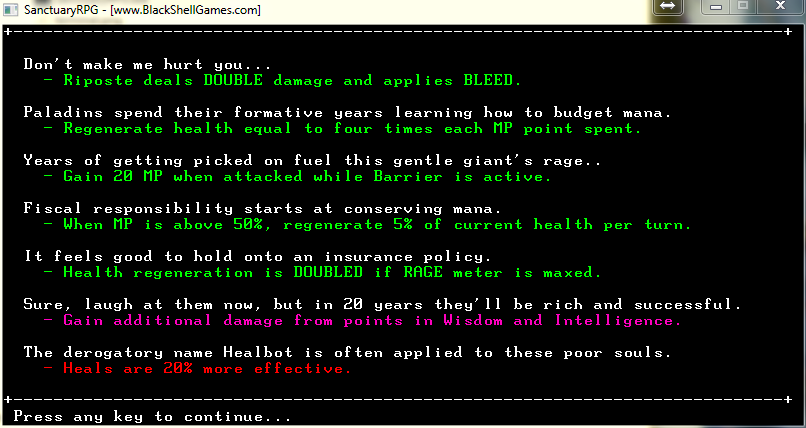 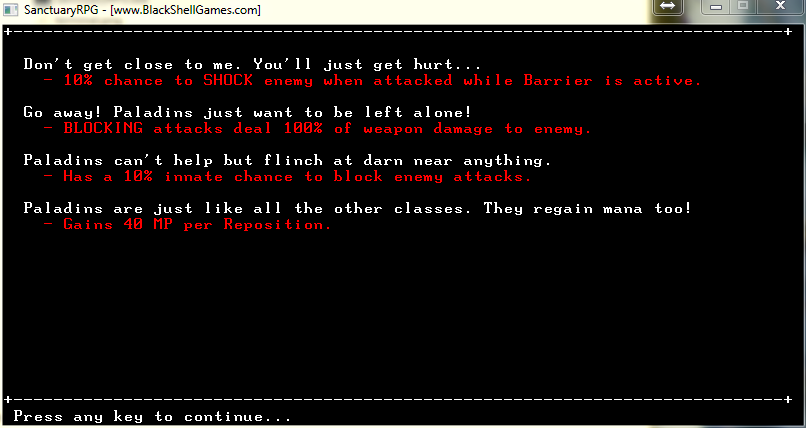 There's more than a bit of complication here, but remember, if you don't like your character, you can always roll another. Anyway, you then choose a gender and a name, and then how difficult do you want this to be. 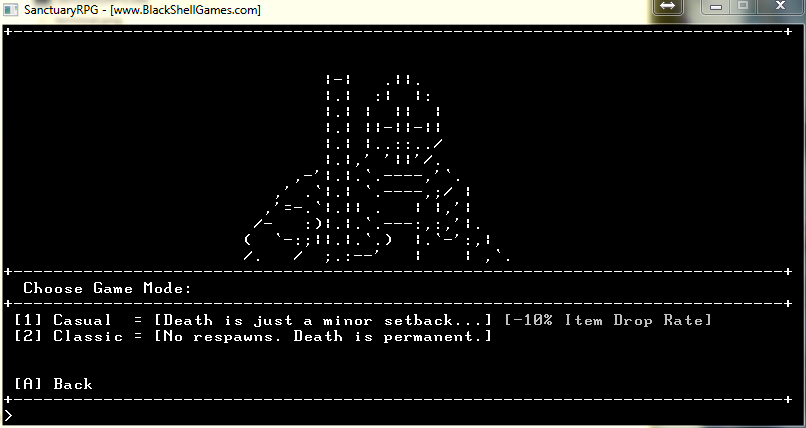 So you can recover from death, but you get 10% less loot. Interesting choice! You then choose a category for your race 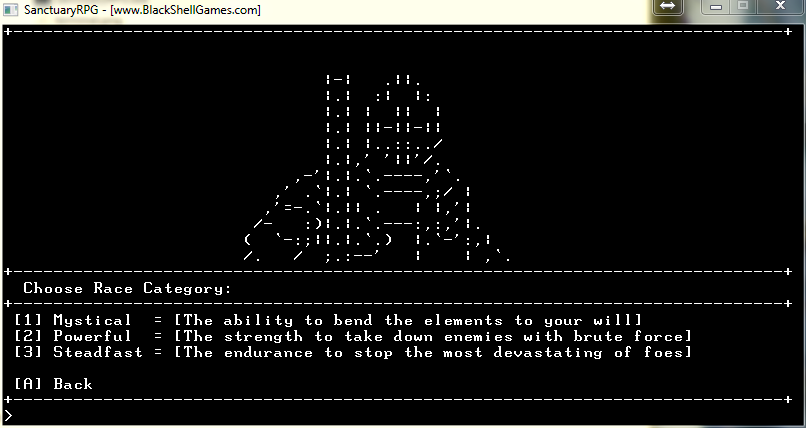 And then a race to go with it. 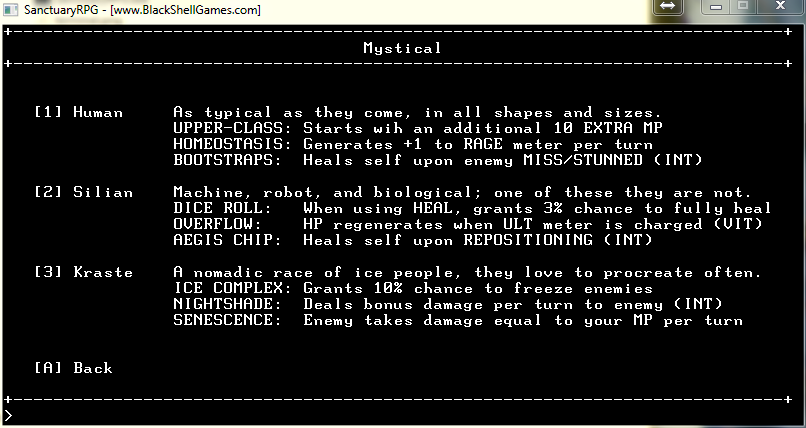 I picked Paladin and now I must pick a race. Not just D&D! So I picked a Silian. I like the subtle humor here. "Machine, robot, and biological; one of these they are not." How cool is that. My guess is that the Silians are robot machines!

Then you can get a nice introduction to the story. It has to do with a magic sword: 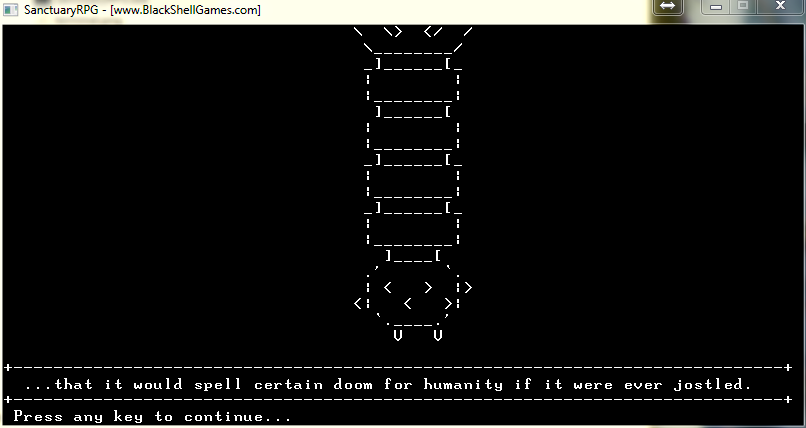 And someone named Cynthia who wanted it ... badly! 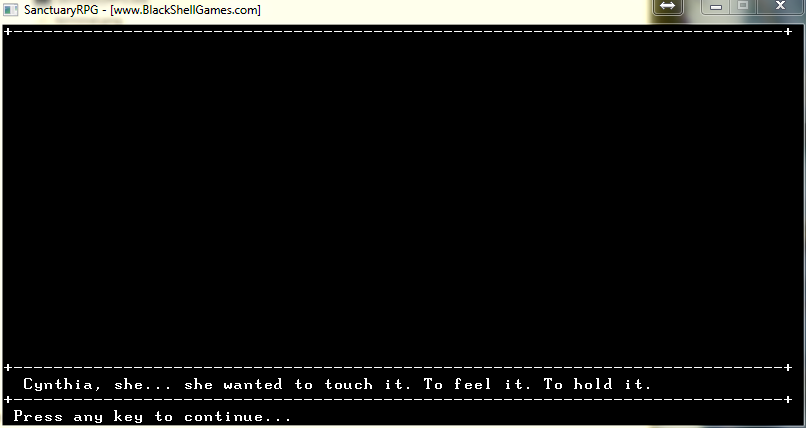 She gets the sword and becomes a monster. So a guy named Cyrus the Magnificent (really!) tries to stop her. 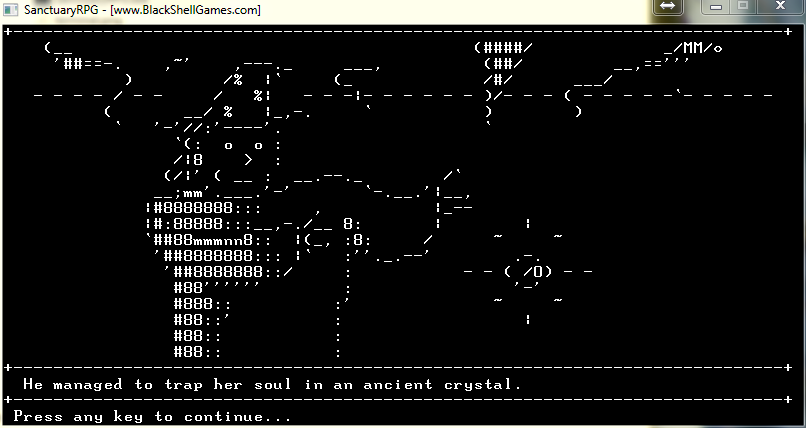 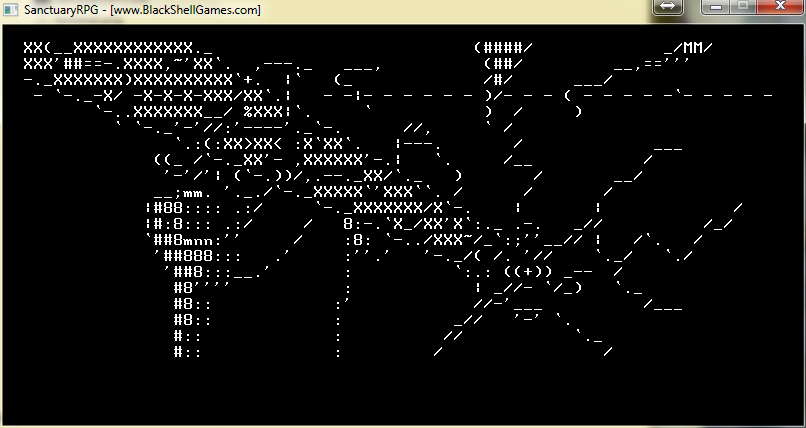 Cyrus is dead (or is he?)  So you must stop her. But you have some help from a mysterious stranger. 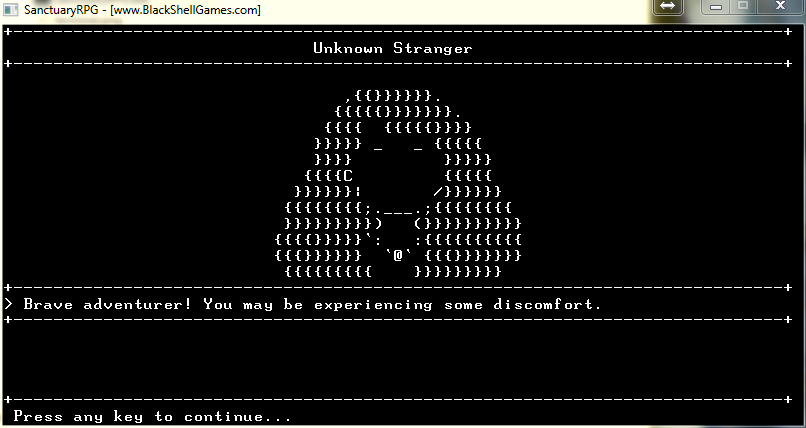 She gives you a key, gold, and a weapon.

And now the game begins. Here's a typical screen. 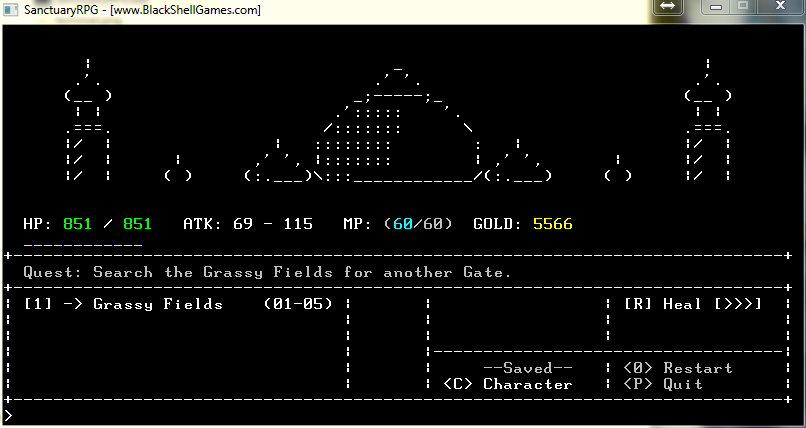 You'll travel, battle, find loot, and save the world from Cynthia (now known as the Matron). I really like this game and find it strangely inspiring. Text-based adventures could have a place on the phone, though the beautiful ASCII art is beyond me (though I seem to remember some programs that will convert a photo to ASCII art, so maybe ....

Cost: free (donations accepted). This game is still in Beta!
Genre: ASCII RPG
Score: 5 (out of 5)
Tested on: PC
Get it at: http://www.sanctuaryrpg.com

PS: you can also get the soundtrack for this game (a very cool one) by Rafael Smith at http://rafaelsmith.bandcamp.com/album/srpg-the-original-soundtrack for $3 or more.  43 songs!!!