Anything with Fox in the name is worth investigating, and Space Fox is no exception. As you may have gathered from my post on Heroine Dusk, I'm an RPG game fan from way back. But I have a new interest I've been pursuing the last six months, which is space shooters. And Space Fox is definitely a space shooter! 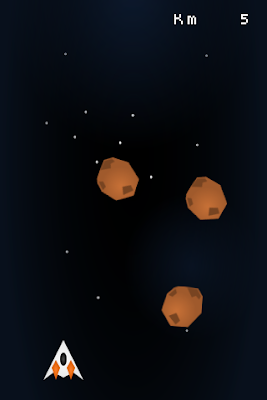 This is a simple game, in that it doesn't have a lot of options and doesn't have music. Your white ship with orange fins is shown at the bottom left. The meteorites are orange. So is a firefox!

Here's the opening screen. You'll see it every time you crash. 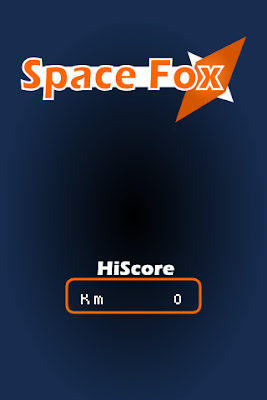 The score is based on the kilometers you travel. The highest I've gotten so far is 43, but I'm sure you can do better.

There are instructions on the Marketplace page:


Discover the dark side of the space and kill all the space invaders.
- Move the ship rotating the device with the accelerometer.
- Tap the screen to shoot.
- Portrait mode only.

The controls on this game are unusual, but very interesting for phones. I've played half-a-dozen space shooter games on the Android, but the controls were awkward and difficult to master. Most of them have little buttons that you have to press on the screen. Space Fox doesn't have any buttons. It has two basic ideas:
That's it! The developer, Luis Jesus Maldonado Varela, probably will be adding things in the next version, but Space Fox is an interesting way to do a space shooter with controls that work for a phone. I covered the concept of tilting in my article on  Device Orientation, and the technology is fairly easy to use.

The game has a few extras. It does have sound effects for the explosions and shooting, and every once in a while if you destroy an asteroid you get something good. But the main point is that this is a different approach to space shooters, one that tries to use the new technologies of the phone!

I'll take off one point for no music and the lack of change (it's just asteroids with no extra scenery), but because this is original and has the name Fox, I give it a 4. The directions are on the Marketplace page at https://marketplace.firefox.com/app/space-fox-1.


Cost: Free
Genre: Arcade
Score: 4 (out of 5)
Tested on: ZTE Open (Firefox OS)
Get it at: Firefox Marketplace